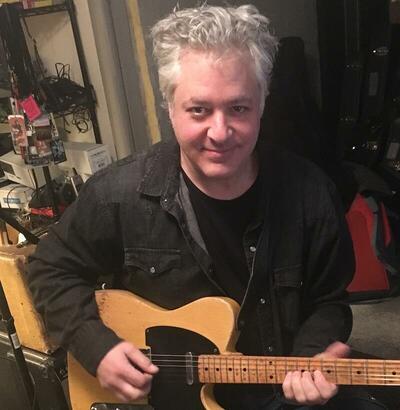 Duke Levine and his '53 Tele in the home studio. (R. Hochschild)

It takes a very specific skill package to be an accomplished sideman, with musicianship and congeniality at the top of the list. Duke Levine brings those qualities in spades, but his versatility, humility, and self-awareness also play critical roles in a career rich with high-profile tours and notable recording projects.

Among the artists he's toured and/or recorded with are Peter Wolf, Mary Chapin Carpenter, Rosanne Cash, Aimee Mann, and Otis Rush, plus he's performed on a host of TV shows (Letterman, Conan, Fallon, Austin City Limits), and many other projects.

Levine has also recorded six albums as a leader, with a new one in the works that provides a fresh take on several chestnuts from the 1970s, an enterprise that he called "a lucid dream of the Seventies." During this episode, you'll hear about all of it, and you'll hear a lot of his music—from his recordings, and directly from his 1953 Fender Telecaster, which he played several times during our conversation to demonstrate his approach to music and some of his inspirations.

"Beneath the Blue" (Duke Levine Band)

"Such a Night" (Giant Kings)

A brief selection of some of the guitarists and other artists mentioned during this episode: